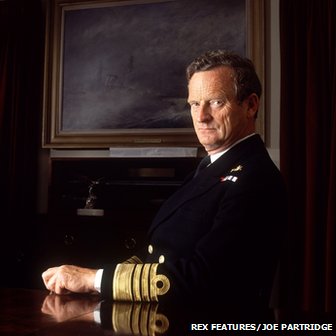 
The Secretary of State for Defence, Philip Hammond, said:

“
I am saddened by the news that Admiral Sir John ‘Sandy’ Woodward, has died and my thoughts are with his family at this difficult time.
“
Admiral Woodward served his country with distinction throughout his career, but he will be best remembered by many as the Navy’s Fighting Admiral after he led the Royal Navy task force, sent by Margaret Thatcher [her government], to re-take the Falkland Islands in 1982.
“
Following this magnificent achievement he served as the Deputy Chief of the Defence Staff and went on, before retirement, to be the Flag Aide-de Camp to the Queen.”

“
Admiral Sir ‘Sandy’ Woodward will always be remembered for his powerful and clear command of the Royal Navy task force that re-took the Falkland Islands in 1982.
“
Undaunted by the challenge of fighting a capable enemy over 8,000 miles from the UK, in the most demanding and extreme of weather conditions, and against uncertain odds, Admiral Woodward’s inspirational leadership and tactical acumen, meshing the realities of the higher political command at home with the raw and violent fight at sea, was a major factor in shaping the success of the British forces in the South Atlantic.
“
Highly regarded and widely respected within the military, he will be sorely missed and our thoughts are with his family and friends at this difficult time.”