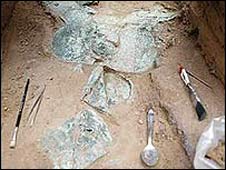 Archaeologists have unearthed an ancient tomb in northern Peru that could throw light on the pre-Columbian Moche Indian culture.
The tomb in Ucupe, 670km (416 miles) from the capital Lima, contained well-preserved human remains along with jewellery and ceramics.
The finds suggested the tomb related to nobility, experts said.
The Moche Indians thrived from 100-800 AD and were famed for their ceramics, architecture and irrigation.
The northern coast has been a treasure trove for stunning archaeological discoveries for the last few decades, the BBC's Dan Collyns reports from Peru.
The dry desert climate of the region has helped to preserve these relics of the Moche civilisation.
Archaeologists said the tomb's body, found inside a wooden sarcophagus, was wearing a gold-coloured funeral mask and was surrounded by copper crowns, earrings, nose pieces and ear flaps
More remains, of a young man and animals such as llamas, were found nearby.
Peruvian archaeologist Walter Alva, whose son Bruno was the dig co-director, told AP news agency: "Some elements like sceptres and crowns of gold are those that identify people of the highest hierarchical level."
Archaeologists believe the tomb may be linked to the other world-renowned Moche ruins in the area.