This book is being printed right now, and I will receive the books in around two weeks.

This book is based on:

- a profound research into both German and Russian archives, both official archives and archives of veterans organizations
- interviews with a large number of veterans from both sides
The historical account is lavishly illustrated with eye-witness accounts from aviators from both sides.
Absolutely balanced between both sides

* 384 pages
* Hardcover
* Large format (A4)
* Over 300 photos
* Aircraft color profiles by Jim Laurier
* Appendices
* Full list of all Luftwaffe losses on the Eastern Front, month by month, unit by unit, in the period in question

(Volume 4, published in October 2019, is also available at the same price.)

Author’s introduction 7
PART I: SOVIET RESURGENCE
Chapter 1 Air Combat Over Krymskaya 9
Chapter 2 Ahead of Two Great Air Battles 15
PART II: KUBAN, THE UNKNOWN AIR BATTLE
Chapter 3 Ten to One in the Kuban Skies 25
Chapter 4 Soviet Air Offensive over the Kuban 51
PART III: FAILURE AND SUCCESS
Chapter 5 “The Russian Air Force is doing whatever it wants over Krymskaya” 79
Chapter 6 German Air Offensive over the Kuban 97
Chapter 7 The Turning Point in the Kuban Air Battle 121
PART IV: ACES OVER THE TUNDRA
Chapter 8 Shturmoviks Against Luostari Airdrome 143
Chapter 9 Mounting Hardships 153
PART V: PREPARING FOR THE NEXT ROUND
Chapter 10 “The power of the German aviation was sapped away” 163
Chapter 11 Trying to Stem the Tide 179
PART VI: “ZITADELLE”
Chapter 12 The Onslaught 201
Chapter 13 Panzerjäger and Shturmoviks: The Southern Flank July 6 to July 9 223
Chapter 14 On Toward Prokhorovka 241
Chapter 15 Victory in the Air, Defeat on the Ground: The Northern Flank 251
PART VII: THE SOVIETS STRIKE BACK
Chapter 16 Operation “Kutuzov” 271
Chapter 17 “The Russians manage everything, and we manage nothing at all!” 287
Chapter 18 The Luftwaffe’s Decisive Intervention: The Orel Bulge July 16-31 293
PART VIII: RESULTS AND CONCLUSIONS
Chapter 19 The Spell is Broken 315
Appendix I Luftwaffe Order of Battle at Kursk on July 5, 1943 324
Appendix II VVS Order of Battle at Kursk, July 4, 1943 328
Appendix III Luftwaffe Aircraft Combat Losses on the Eastern Front April 1943 – July 1943 332
Appendix IV Aircraft Color Profiles by Jim Laurier 333
Appendix V Table of Equivalent ranks 349
Appendix VI The Structure of the Luftwaffe 350
Appendix VII The Structure of the Soviet Air Forces in 1943 351
MAPS
Eastern Front April 1943 8, 162
The Kuban Bridgehead 24, 78
The Far North 142
The Battle of Kursk 200, 270
Eastern Front July 31, 1943 314
NOTES 353
SOURCES 372
INDEX 377

Next volume in this series is a completely new and expanded edition of Volume 1.
The first edition of Volume 1 (published 20 years ago) contained a maximum of 100,000 words. The second edition not only has much higher quality as far as the research is concerned but also contains twice that wordcount, a very large number of absolutely new photos (many of which are from pilot veterans’ photo albums and have never been published before), printed in the same high quality as in Volumes 4 and 5.

The second edition of Volume 1 is so heavily updated and expanded that it more or less is a completely new book as compared with the 20-year-old first edition.

I am publishing this book by myself, so that I can keep full control of the product. In this way, I can have many more photographs and twice as much text in each volume as I was allowed when other publishing companies produced it. (By then I had a limit of 100,000 words per volume; now Volume 4 has over 200,000 words and Volume 5 has even more.)

I have no real budget for marketing. Although unique and groundbreaking in that it tells the full and detailed story of the air war on the Eastern Front from both perspectives, it is not particularly well-known, and therefore has not been as much read as I had hoped it would be. There are too many that don't know about it. So if you could help me by spreading the word, it would be of great help. 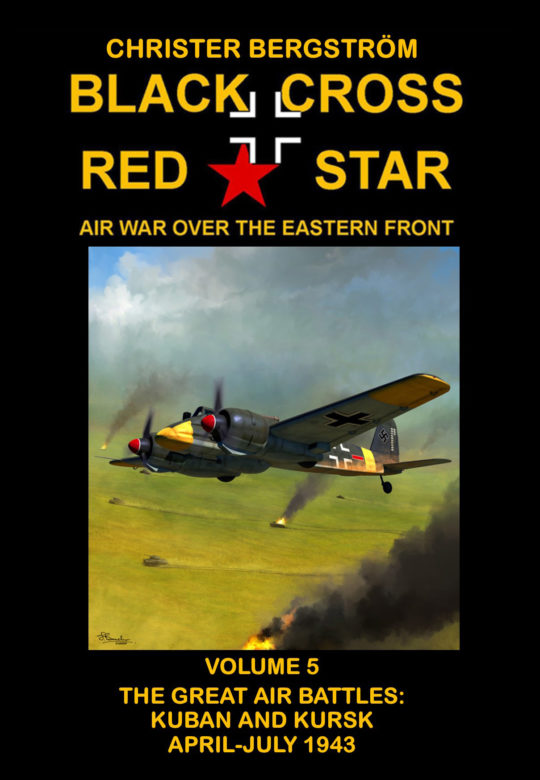