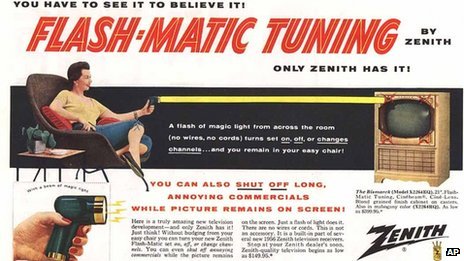 The inventor of the television remote control has died at the age of 96, his former employer has said.
Eugene Polley passed away of natural causes on Sunday at a Chicago hospital, said Zenith Electronics.
His 1955 invention, Flash-Matic, pointed a beam of light at photo cells in the screen, turning the set on and off and changing the channels.
His invention was a luxury add-on in the days before hundreds of cable television channels.
Born in Chicago in 1915, Polley began his engineering career in 1935. He worked at Zenith for 47 years, earning 18 US patents.
He was a long-time resident of Lombard, Illinois, outside Chicago.
Because the Flash-Matic used light to operate the television, it was temperamental and other lights could interfere with its use.
It was followed by sonic-controlled remotes and then infrared and radio frequency models.
Along with another Zenith engineer, Robert Adler, Polley was honoured in 1997 with an Emmy for his work.