Saddam's luxury yacht up for sale 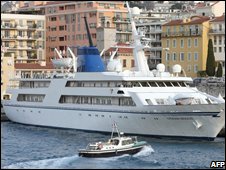 The Iraqi government is to sell a luxury yacht which was previously owned by the late leader, Saddam Hussein.

The 82m (270ft) Ocean Breeze is equipped with swimming pools, an operating theatre, a helipad and an escape tunnel leading to a submarine.

Iraq has decided to sell the yacht after winning a legal battle with a Jordanian company over its ownership.

The yacht is expected to sell for millions of dollars, but brokers have said the decor may not suit all tastes.

It has been decorated in what has been described as "Arabesque" style, with mahogany carvings, gold tap fittings and brightly-coloured deep-pile carpets.

The ship, originally called Qadissiyet Saddam after an historic Iraqi military victory, was built in a Danish shipyard in 1981 by workers sworn to secrecy.

But, despite its luxurious facilities, Saddam Hussein is never thought to have stayed on board himself, fearing political instability if he left Iraq.

So for most of its life, Ocean Breeze was moored in Saudi Arabia - until last year, when it arrived in the French port of Nice and remained there while its ownership was determined.

A Cayman Islands firm, part-owned by King Abdullah of Jordan, had claimed that Saddam had given it the yacht to them, but a French court ruled last summer that it should be returned to the Iraqi government.

Government spokesman Ali al-Dabbagh said the ministries of finance and foreign affairs would be responsible for the sale.

Brokers have suggested that in the current financial climate, it could be difficult to sell a vessel which is luxurious but not up to the standards of more modern yachts - it does not, for example, have a gym and boasts only one helipad.

However, offers are expected in the region of $35m (£18m), and one broker suggested the yacht's history could be "a good selling point".

Re: Saddam's lyxjakt till salu

Re: Saddam's lyxjakt till salu