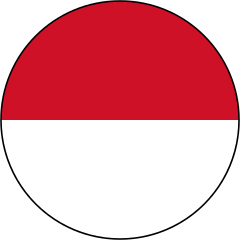 "After the Japanese announced their surrender at the end of WWII, Indonesian nationalist leader Sukarno declared Indonesian Independence on 17 August 1945. Several days later, Indonesian People's Security Force (Badan Keamanan Rakyat) was formed to undertake security duties. The Air Division of this force was also formed, using ex-Japanese planes scattered everywhere, especially in the island of Java, including Bugis Air Base in Malang."
"The new roundel was created simply by painting white on the lower part of the Japanese Hinomaru, reflecting the red and white of the Indonesian flag."
" This marked the birth of the Indonesian Air Force on 9 April 1946. However, tensions rose as the Dutch tried to re-claim their former colony and launched an assault on 21 July 1947, destroying most of the planes on the ground. Some planes survived though and were hidden in remote bases."